This is based on Chuck Wendig’s Friday Flash Fiction prompt. His model this week is X meets Y, and I pulled… “Snow Crash meets Discworld.”

She hovered over the battered steel behemoth for a while, watching. The sides of the ship were haphazardly riveted together, and sandy skiffs were locked onto the eye bolts soldered into the front and rear seams. The effect, from the air, was millipede-esque.

She could see the faint movements from the black-clad figures along the decks of the ship, and murmurs that sounded like words but somehow weren’t. The air around her frizzled with energy*, and she could feel the small hairs rising on her neck. She swooped in lower and trailed a ragged ellipse around the stern of the ship, examining the markings on the bulwarks.

Sigils. Icons. Knots. They glowed with luminescent algae, and pulsed as she passed.

Hmph. Headology, Osmina said. No better expert, she said. She was full of it. This is all visual tricks and intimidating fakery. What can I learn here? This is no bloody witch’s cottage. You can’t even smell anyone.

She lifted up on her broomstick and was preparing to head back to the Hub when she heard it.

“You can land on the muster station.”

Agatha’s vision was filled, briefly, with an image of the flat part of the deck near the center, then the image faded. She shook her head, then looked up at the moon.

Freya was leaning against a rusted metal davit as Agatha stepped down from the muster deck. The lifeboat that was once locked into the davit was now a collection of wood planks, rattling against the steel side of the ship.

“What does that do?”

“Oh, it gets us better reception.”

“We share in experiences and pass them on. Right now, three of my collaborators are watching us interact.”

Agatha paused. “They are? Why?”

“Because we haven’t had a Ramtops witch visit us since we left Ankh-Morpork after the… ” Freya waved her hand aimlessly.

Freya’s smile shone brightly despite the gloom around the ship. “Yes! The Unpleasantness.” Her fingers found the antenna and twitched for a bit. “How much do you know about us?”

“I… I was told you know more about headology than three of the best witches in the Ramtops could teach me. According to said witches.”

“Headology?” Freya tsked and shook her head. “This is more than headology.”

Freya’s eyes glowed as she stepped towards Agatha. “Have you ever heard of neurolinguistic hacking?”

Agatha took a step back. “Heard of WHA?”

Agatha’s mind immediately went to a long-ago time, back when she was a young child, thinking of the strange lithe beings that had thrown her into a root-cellar, laughing as they locked her in, remembering how she cried because she knew she was unworthy of their sight.

“I think that would be marvelous,” Agatha breathed.

Freya stepped forward again. She touched the tips of her fingers to Agatha’s forehead. “Are you ready to receive?”

Agatha remembered the pain, the elf-shot in her friend’s shoulder.

Freya bent down and whispered into her ear.

Agatha woke up on a raft, rocking on the waves plashing against a pink beach. In her head, a thousand images and sounds warred for dominance. She squeezed her eyes closed, trying to gain control over the many

Where do you want to be?

Immediately Agatha was filled with a rush of longing for home – the long cliffs on the Hubward steppes, right on the northernmost edge of the Ramtops. She could smell the ice-laden breeze coming down from the mountains, spiced with the fragrance of smashed granite** exhaling from the dwarven mineshafts.

She sat up. The greening light flowed through the forest canopy onto the bracken.

Yet somehow, not. Her brain cascaded through the data.

Agatha looked up. A hooded figure was examining his nails… no, his distal carpal phalanges.

How did I know that?

WHY IS HE LOOKING AT HIS FINGERBONES?

The hood turned to her. Two pale blue stars looked out at her.

WELCOME TO TIME OUTSIDE TIME, AGATHA FARTHING. I AM LOOKING FORWARD TO OUR… OKAY, OUR TIME TOGETHER.

* They were sharing in the listening of a Klatschian play, being recorded live by one of their compatriots. Their enthusiasm was, literally, palpable.

** Humans cannot distinguish the scent difference between individual granites. Most dwarves think granite isn’t such a great smell, unless it is luxullianite granite. They are more partial to the smell of basalts like sodalite.

One thought on “Flash Fiction – “Hacking”” 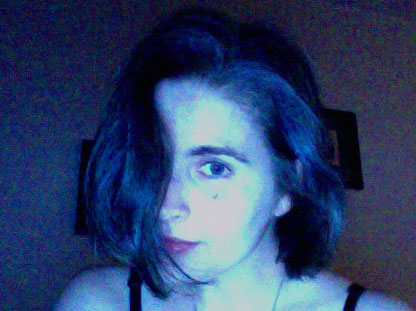