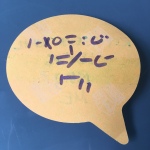 I used to be very good at soaking in new languages, though I definitely needed a teacher to help me learn*. Learning new words and how to string them together was almost an ecstatic thing for me. Even the basic concept of “new words” gave me joy, whether the new words were in my birth language or another. Words that didn’t have an equivalent in English prompted an even more intense delight, and I loved swimming in them.

At the time I was in high school, my state had standardized foreign language exams as part of the graduation process. One of the things I was most proud of was that I aced the French exam. My high school only offered French and Spanish, but once I got to college I jumped into German and had plans to learn Quechua and Malagasy, for use in the countries I most wanted to visit. After college, my first job was at a global non-profit, in which I gained a deep desire to learn Tagalog and Arabic. I also started catching on to web coding, and understood those as languages too.

Then came the height of my fight with anxiety. Not only was I enduring weekly panic attacks, but a phobia that used to be minor had blown up and was making it difficult to work. I didn’t respond well to medications, and after some exploration with a therapist I trusted, I started neurofeedback therapy.

Well, I gotta say, the therapy worked on my anxiety. I stopped having panic attacks so badly, and after a while they only came maybe once/twice a year. After a bit of the therapy, one session of talk therapy just whooshed my phobia away. Seriously miraculous.

But I could no longer learn languages, and I was rapidly losing the non-native language vocabularies I DID have. Including some of my coding knowledge.

My therapist did say that the brain’s plasticity could result in some interesting side effects, and that some people stop craving certain foods or end up losing things more often or other such interesting quirks. She wasn’t surprised when I mentioned my own side effect. But as I talked, I realized that I didn’t want the anxiety back. I’d rather lose the languages and be assured my phobia wouldn’t return.

That was over fifteen years ago.

So. Fast forward to a few months before now. I’ve gotten some clues that a certain change is afoot in my quirky brain. It’s best exemplified by something I did while shopping for pet food a week or so ago. I was reading an ingredient list on a bag of dog food to Jon, and only after a few moments did I realize I was reading the FRENCH list, translating it automatically to English for him.

This was after I had been noticing that when people were speaking French in movies or shows, I’d occasionally say (out loud before thinking about it) “that’s not what they said.” Another day I had a conversation with Jon about the word ‘jamais’. All when I hadn’t been able to do anything other than the most simple translations for over a decade and a half.

Therefore, I’m starting back on the path of language….but instead of focusing on regaining fluency, I’m focusing on language as a meditation. Because I seem to have access to the words when I’m most present in a moment. When I’m not thinking about it.

I’m hoping to re-access the joy I felt in new words. Regardless of whether or not I retain them.

* I was and am still kind of embarrassed that I didn’t learn my family’s native language until I was 19 – like I said, I needed a teacher. I couldn’t just grab a textbook and learn – something about the act of watching people speak to me solidified the words in my head better than reading or listening did.