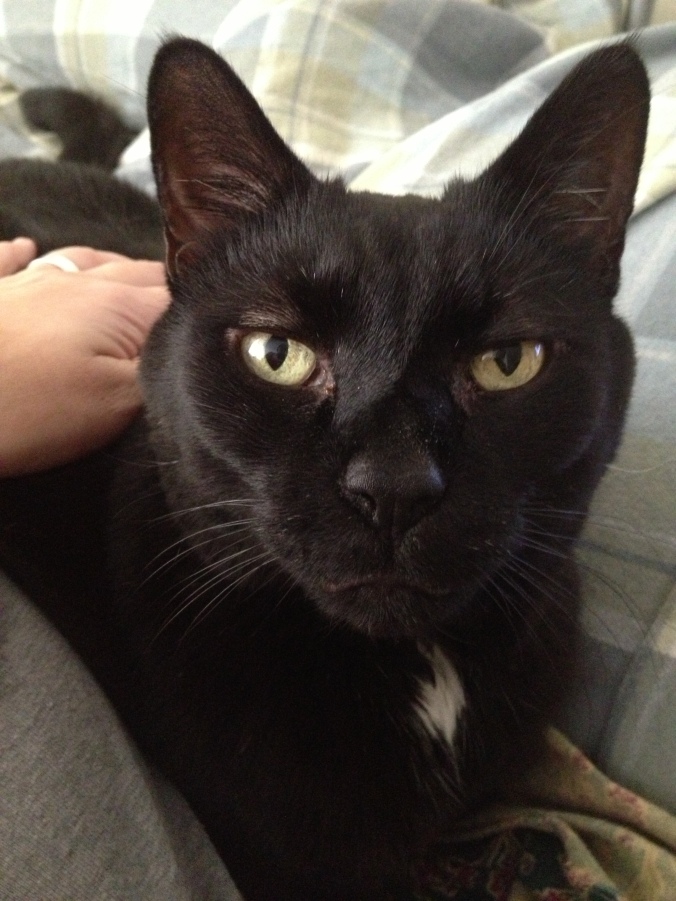 On Friday, June 26th, our beautiful Thelonius Huxtable Davidson – Theo for short – was released from his struggle with cancer. Theo was only 14, and we didn’t expect this. He had what looked like an abscessed tooth, and after getting dental surgery he seemed fine. A month after dental surgery we noticed a growth on his gums, and made an appointment with the vet. Within the two days between the call and the appointment the growth was noticeably bigger. A biopsy confirmed what we were afraid of. Theo had aggressive oral cancer. By the time the biopsy came back, the growth had spread through his palate and into his lower sinuses. There was nothing we could do without submitting the poor guy to a feeding tube, and our vet said that while we could extend his life, we were looking at just a few months rather than the weeks we had, now.

When I met Theo, he was not an affectionate cat. He was elegant, and fastidious, and tolerant of his younger brother and sister, and he liked lying *next* to you but not on you. My best memory of him back then was him sitting patiently behind me, waiting for me to notice that he had a purple string draped over him.

He then waited even longer for me to take a picture with my phone, then shook his head, got the string off, and walked off to clean up. But when Jon and I moved in together, things changed.

Within a few months of us moving to the Bronx, he had started sleeping on us when we slept curled together, then graduated to wiggling himself just so, in order to sleep between us. We discovered he had a heck of a purr. He would roll over onto his back for cheek rubs, though he still wouldn’t tolerate his belly being rubbed. By the time 2014 hit, he was starting to tolerate the belly rubs, and he started to love snuggling with his brother.

What he didn’t know is that he had also decided that Amelia was part of his pride, too. This past March, while we were packing for the move to our new place, I was feeling distraught and frustrated, and the music I was listening to over my Bluetooth speaker wasn’t cutting it. I decided to take a break and watch some videos of Amelia – specifically the ones of her dancing in the old hallway in Windsor Terrace.

If you’ve seen that video of her running down the hall on my post for her, you can hear her collar jingling pretty loudly. Well, Theo heard it too. And he perked up, then ran to the door looking for her. Then ran back to the bedroom. Then started looking all around for her.

He was upset. He wouldn’t let me console him. He was going to find her.

It took him about 2 hours to stop looking.

Last night, Jon had a dream. He dreamed that Amelia was in a giant version of the carrier we used to take Theo to the vet when he could no longer eat, or even close his mouth without pain. It was used by all the cats but it was pretty much Theo’s carrier. In Jon’s dream Amelia was her normal weight and rolling happily on her back like she did when she wanted to play the bitey game, similar to how she rolled after baths. And when he told me this, we mourned together at that fact that we both really, badly wish we could believe that Theo had gone to find her.

Unfortunately, we can’t. We’re not believers in an afterlife. There’s no heaven in our ideology, and without a heaven, there’s no rainbow bridge to comfort us.

But yknow, it’d be really freaking awesome if we were wrong on this one. :)

We love you, Theo.

Our amazing vet, Dr. Rosado, gave him a few weeks to live.

He also said that while oncology could prolong his life, it wouldn’t be more than a few months.

Jon did some additional research, and the prospect for treatment is pretty awful – it means cutting away most of his face and having the poor guy live with a feeding tube. The tumors are in the top of his jaw and we’re 90% sure it’s grown into his sinuses, so it’d be a pretty dramatic thing.

He just had a few teeth extracted on April 29th. Nothing looked amiss then.

Neither of us are taking this well. We lost Amelia only 8 months ago. And this will be the 2nd cat Jon has lost to oral cancer, so this is feeling pretty fucked up to both of us.